Words in the English Language that is Confusing 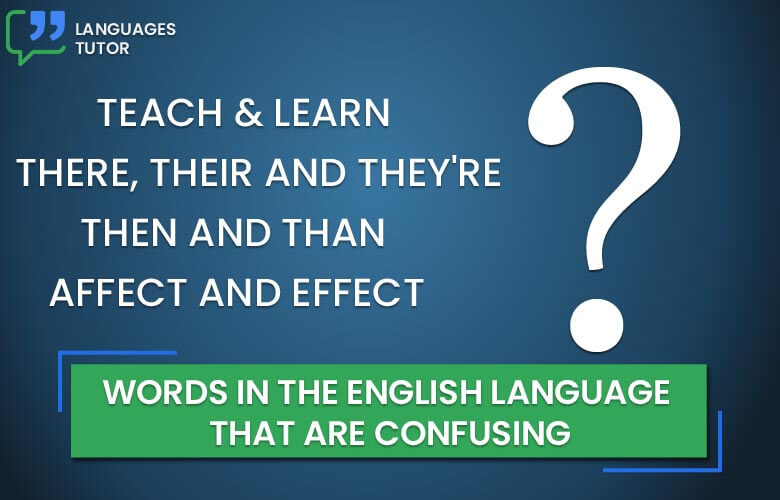 Words in the English Language that are Confusing

English language dictionary contains hundreds of words that look similar in meaning but have different contexts to use in. Sometimes, even the spelling of the words is the same but has altered meaning. Often, some beginners in the English language use these words incorrectly. Here, in this blog, are some genuine information for you. After which, you can use that similar words in the right context.

There, their and they’re.

These words look very same, but they have different meanings when used in a sentence.

Word ‘there’ is used when referring to something that is not here; for example: put it there.

Word’ their’ is used as a possessive adjective. For example their clothes, their school, etc.

Word’ they’re’ is the contraction of ‘they are often used in present continuous, indefinite, and passive tenses. For example, they’re going to school; they’re brave, they’re kicked, etc.

Many times, you have noticed that some English users cannot differentiate between, i.e., and e.g., We use ‘i.e.’ there need to add some additional information to the text, for example, the government of Pakistan announced local government election i.e. in most districts of KPK.

We use e.g., means ‘for example. So, it is used when there is a need for a clearer meaning; I love milk-made food, for example, butter and cheese.

Me, myself, and I

They look very similar, but there are clear differences among them. ‘I’ is a personal pronoun, and it is used as an object in a sentence, either a direct object or an indirect object; for example, they give me a bowl full of rice, he looked at me angrily when I asked him for a bite of his cake.

‘I’ is a personal pronoun and is often used as a subject in a sentence. For example, I don’t like meat.

Difference between your and you’re

‘Your’ is used as a possessive pronoun in a sentence, and it means belonging to someone. For example, your hat, your pen.

‘You’re’ is a short form of you are. So, it is used in continuous form. You’re going to school, you’re not capable of doing it.

The most confusing words in English vocabulary. ‘it’s’ the contraction of it is. Often used in a context for indication or as dummy it. For example. It is cold today; it is the very nice cap.

‘Its’ is used for possessive adjectives and pronouns. For example, I don’t like the sound of the train; its sound is very screaming.

‘Than’ is used for the comparative degree. For example, my shoes look shinier than yours; the sun is hotter than the moon.

‘Then’ is an adverb of time, and it is used for something to discuss further or come later in the discussion. I will visit Karachi then Lahore.

These two words have almost confused every English user at least once. ‘Affect’ is the verb to show the impact of something on someone. The covid-19 affected the education sector very badly.

‘Effect’ is a noun and has the same meaning as an effect. For example, the effects of covid-19 are numerous on the education sector, and it has also impacted the economy of Pakistan.

There are hundreds more words that are ambiguous. So, if you want to know more about the English language, register yourself in an online learning course that a languages tutor offers.