Sentence Structure in the English Language 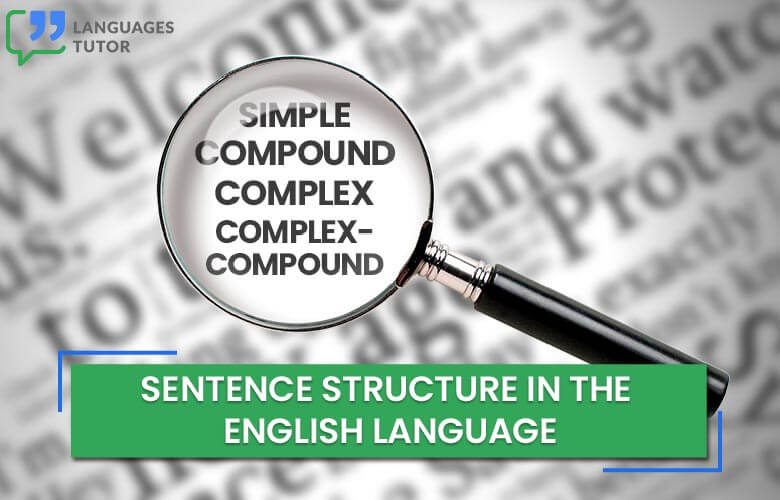 Sentence Structure in the English Language

Sentence structure in a specific language means how all parts of a sentence join together to form a meaningful statement. Here are some rules that will help you form the sentence and use it correctly and confidently.

You may also like to learn about the “Languages Courses”.

Basic parts of a sentence

However, there are many parts of a sentence, but each must contain its basic parts: verb and subject.

The verb is an action that is done in a sentence. For example,

Certain actions like playing, eating, going, and drinking happen in the above sentences, so these words are parts of the sentences called verbs.

The doer of the action in a sentence is called the subject; in the above sentences, they, we, he, and she is words that perform actions, so these words are parts of the sentences called subjects.

However, sometimes we add some additional words to the sentence to form its correct structure. For example,

In these two sentences, words ‘are‘ and ‘was‘ are used additionally, so they are called helping verbs. When a verb is not part of any sentence mainly but helps in structuring the sentence is called a helping verb.

Sometimes, seemingly, there would be no subject in a sentence. For example,

Furthermore, some sentences also have ‘objects’ to clear the message in a sentence. For example,

The words’ water, apples, letter, ball,’ add to the sentence’s more vivid meaning in the above sentences.

The direct object is used in a sentence to receive a verb’s action. There are some sentences for you to understand.

In the above two sentences, the words’ gift and book’ receive the verb’s action, which is direct objects.

There are specific rules for structuring English sentences. First, you should focus on the verb, subject, and object placement. So, the rules for forming sentences in English are subject + verb + object.

You will be more likely to understand after reading the following sentence.

Furthermore, the mixing of words may lead to misconceptions. So, strictly follow the English grammar rules while forming sentences.

Knowing about English grammar is very necessary for using the English language correctly. However, some linguists are agreed on avoiding the grammar rules while speaking English. But, for commanding over perfectly, you will need to learn grammar, as it is necessary for written language. It will help you understand the complex structure of English language sentences.

Click on languagestutor.org to learn more about the English language, Arabic, Pashto, and Urdu language.